Kungsleden increases profit from property management with 46 per cent

THE REPORT IN BRIEF

Comments on events during and after the quarter 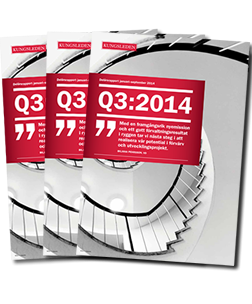 Comments from Biljana Pehrsson, CEO
Kungsleden has successfully completed the company’s rights issue for nearly SEK 1.6 billion, which marks another important milestone in realizing the company’s strategy. The rights issue was fully subscribed with great interest from shareholders both with and without preferential rights. Having successfully completed the rights issue and with strong support from our shareholders, we are now ready to realize the potential that we identified through acquisitions in 18 selected micro locations for commercial properties and some 20 development projects among our own property holdings. We now have the financial flexibility to grow the property portfolio to around SEK 25 billion, with a long-term ambition of increasing it to SEK 30 billion.

Thus far in 2014, we have implemented a successful consolidation and streamlining process by divesting non-strategic properties. This means that, as of the third quarter, Kungsleden has transitioned to an active buyer. We currently see good acquisition opportunities in the market and completed two strategic acquisitions in Malmö during the quarter, worth almost SEK 400 million.

Our focus is on actively managing, developing and improving our properties. In September, we had the first-ever “Kungsleden Property Days”, which was a company-wide showcasing event of our property holdings, where all managers presented plans on how new values will be realized at each property and development right.

Operations continued with a positive trend during the third quarter. Gross profit was SEK 404 million, an increase of 30 per cent compared to the same period last year due to larger property holdings and a higher operating net. Gross profit for the third quarter increased by 6 per cent compared to the second quarter despite that the size of the property portfolio had declined due to the sales that were made. The surplus margin for properties was 73 per cent, which is in line with last year.

During the interim period, new leases were signed for approximately 83,400 m2 and the financial occupancy rate was nearly 89 (90) per cent

Profit before tax increased to SEK 322 (202) million, despite the fact that during the quarter there were negative unrealized changes in the value of financial instruments of SEK –70 (57) million caused by falling long-term interest rates. The value trend for properties was positive, and the total change in value was SEK 176 million. The positive value change for properties that were vacated during the quarter contributed to this, as did higher values resulting from improved operating net and investments that were made. There was a positive impact on the value increases from a higher occupancy rate and higher rental income. However, changes in the market’s required return have not been taken into consideration in the third quarter. As always, Kungsleden will make a complete internal and external valuation of the entire property portfolio at year-end, at which time any changes in the required return will be considered.

Profit before tax, not including changes in the value of financial instruments improved to SEK 392 (145) million.

We have decided to move Kungsleden’s head office to one of our own properties during autumn 2015. We will be moving from leased facilities at Vasagatan in central Stockholm to our own building on the central boulevard, Warfvinges väg, located in flourishing Västra Kungsholmen, Stockholm.

With a new foundation following changes that were made since the new strategy was implemented in 2013 and a strengthened balance sheet, Kungsleden now enters into a new phase of its development. The company will now capitalize on its favourable situation and realize its growth plans so that it can create even more value for Kungsleden’s shareholders. In this context, I would like to thank our shareholders for the support they have shown by providing the company with the capital it requires to continue on this exciting journey.

Kungsleden AB (publ) discloses the information in this press release according to the Swedish Securities Markets Act and/or the Swedish Financial Trading Act. The information was provided for public release on 24 October 2014 at 7:00 a.m.