After the end of the period 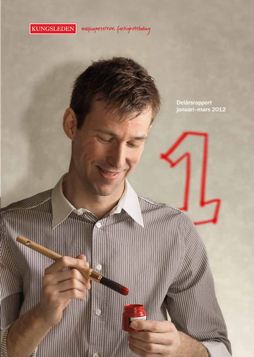 Sales and administration costs were up by just over SEK 11 m, mainly as a consequence of a larger property portfolio. A larger portfolio means more borrowings, which were charged to net financial items. But increased costs were more than compensated by gross profit increasing by SEK 107 m, with most of the increase provided by the properties purchased from NR Nordic & Russia Properties. Property sales produced a profit of SEK 20 m net.

I’m very satisfied with our results and the stability of our underlying operations. A mild winter early in the year helped the earnings capacity of our portfolio to increase by 8.0 per cent, from 7.9 per cent at year-end. The operating surplus margin increased from 66.7 per cent to 67.2 per cent. Profit for calculating dividends was SEK 121 m, compared to SEK 78 m last year despite unexpected tax costs, with a SEK –80 m liquidity effect, after rulings by the Administrative Court of Appeal in Stockholm.

Retroactive tax The rulings are for two companies in the group, which in 2004 claimed deductions for losses on liquidation when liquidating limited partnerships. These losses arose as part of internal restructuring, and accordingly, the Administrative Court of Appeal did not regard them as actual from a group perspective. Rulings in various administrative courts of appeal on the same legal issue—to which Kungsleden was not party—have differed in the past year. Our view is that we have consistently followed the rules on each occasion, and against this background, we intend to have this matter considered at the highest level. It is regrettable and very frustrating to be unable to offer clearer information after eight years.

Nordic Modular and Hemsö Nordic Modular made a good start to the year. Sales of modules increased by 18 per cent, with an upturn also apparent in lettings. Hemsö’s operating net also made positive progress. I can conclude that the interest in public properties remains high, and at present, we see no risk of increased required returns in this segment.

For Kungsleden’s part, the lettings market featured higher activity with more terminations, but also more new contract signings. In like-for-like portfolio terms, net lettings were virtually unchanged, but were higher in absolute terms, for reasons including us now holding a larger portfolio. When companies see a need to adapt their premises, they start earlier now than pre-financial crisis. Our mission is to maintain unchanged, and preferably reduced, vacancies.

Funding In the period until the start of the second quarter, we had rearranged and secured definitive tenders on basically all our refinancing requirement for 2012. This means that we have new credit and loan facilities totalling SEK 7.4 billion. Average interest after arranged refinancing is estimated at 6.7 per cent. The previous facilities were entered a few years ago when loan terms were more advantageous. The interest margins received are consistent with what the rest of the market is paying. We will continue to work to limit our funding costs and diversify our loan portfolio through alternative funding sources, such as unsecured bonds.

Outlook Our business is progressing very stably, and our average property yield increased to 8.0 per cent in the quarter. We also did some positive transactions, but the tax rulings for the 2004 tax year arrived in April. Overall this meant the downgrade of the Board of Directors’ estimate for profit for calculating dividends, which was reported earlier in April, was limited to SEK 50 m. The estimate for the full year is SEK 550 m, against SEK 600 m previously.

Our equity ratio was 38 per cent, we have strong and stable cash flow and, long lease contracts with strong counterparties, several property segments and geographical diversity that limit risks, and a loan to value ratio consistent with current standards, strong liquidity and arranged refinancing. Accordingly, my judgement is that a potential market slowdown would have a limited impact for Kungsleden’s part.”

Kungsleden AB (publ) discloses the information in this press release according to the Swedish Securities Markets Act and/or the Swedish Financial Trading Act. The information was provided for public release on 26 April 2012 at 8:00 a.m.

Kungsleden’s strategy is to ensure sustainable high and stable returns proceeding from its existing holding, and through acquisitions and divestments. As of 31 March 2012, the property portfolio comprised 317 properties with a book value of SEK 15.5 bn. The portfolio was located in a total of 100 municipalities, mainly in southern and central Sweden. Kungsleden has been quoted on the Nasdaq OMX Stockholm since 1999.