Kungsleden is currently installing Sweden’s largest window film project based on nanotechnology and tests new roof materials. Both projects are underway in Västerås, west of Stockholm, in order to improve the indoor climate in Kungsleden’s properties. New technology is the common denominator for both projects.

One of Kungsleden’s properties in Västerås has large glass façades, which poses a challenge in terms of the indoor climate during the summer. The window film producer 3M and the installation company Basreklam has together with Kungsleden installed a new sun control window film based on nanotechnology on the 900 sqm glass walls.

The window film is virtually invisible to the naked eye, but reduces 60 percent of the sun’s rays and 99.9 percent of the UV rays. The film’s optical specification allows it to screen the sunlight without making the room darker. Additionally, the window film is free from metals otherwise common in traditional window films, which minimizes corrosion and signal disturbance for mobile phones.

“Thanks to 3M’s window film we don’t need to cool the building to the same extent during the summer, which is very energy consuming. As a large property owner we have a responsibility towards the environment and our tenants, which is why we constantly review new technologies and materials in order to reduce our footprint on the environment and society”, says Thomas Wallin, Property Manager at Kungsleden.

Kungsleden has also chosen to evaluate an alternative technology for the roof on an office building on the Finnslätten area. The roof is 4,200 sqm and covered by the mineral Olivine, one of the worlds most common minerals. Olivine has the capacity to accumulate carbondioxid, so when it rains on the roof carbondioxid in the air reacts with the Olivine and transforms into silicon dioxid (Silica) and magnesium carbonate.

“The advantage of large roofs is that they cover a vast area and therefore become effective accumulators of carbondioxid. The roof on our office building accumulates 7,500 kg of carbondioxid during its life span of 30 years, which equals the emissions of 53,000 kilometers of driving”, says Thomas Wallin. 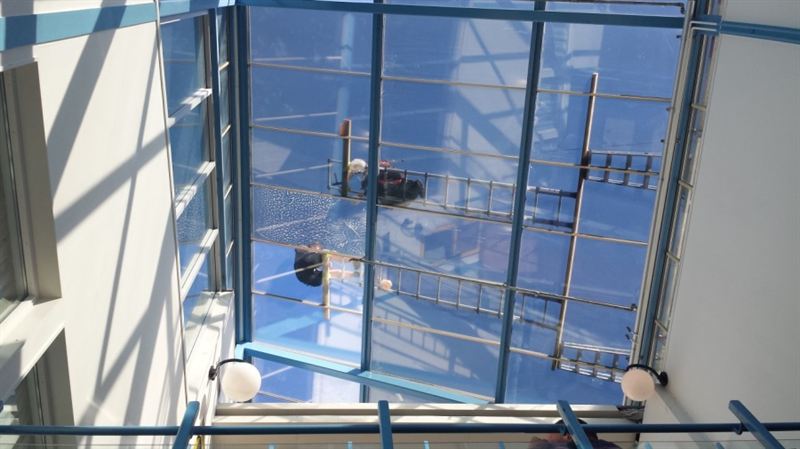